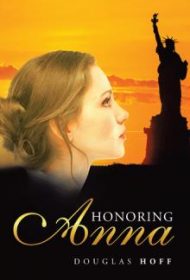 Based on the life of the author’s grandparents, Honoring Anna is the fictionalized story of a handful of individuals who immigrate from Norway to the U.S. in search of a better life.

As the story opens, Rasmus Johnson is a master carpenter engaged to his childhood sweetheart, Astrid, and about to realize his dream of moving to the United States. But on the eve of his wedding, Astrid tells him she can’t leave her family and will not accompany him. Rasmus is devastated but nonetheless boards the ship, leaving Astrid behind.

On the ship, Rasmus meets Anna Ingevich, who is escaping a cruel stepmother and distant father. Quickly forgetting his heartbreak, Rasmus falls for Anna, who soon agrees to marry him. The two pass the various tests at Ellis Island and find a room in a boarding house. But as they prepare for their wedding at the local courthouse, Rasmus learns there is a telegram awaiting him. The transmission contains news that forces the wedding’s cancellation.

A third immigrant, Iver Olson, fills out the mix. Olson dreams of ranching on the prairies out West. In time, the trio’s lives intertwine as Rasmus seeks to make good on an old promise to Anna.

This is a simply rendered tale, enhanced by some nice twists, honorable characters and the author’s inclusion of interesting details about the immigrant experience; for example, readers learn that immigration officials had the authority to change someone’s last name and that immigrants were provided interpreters. Anna, the central character, possesses a can-do spirit and a natural ability at most things she attempts. If the novel suffers from any flaws, it may be that the characters are too good and the endings of various plot developments nearly always happy.

Overall, this is an enjoyable tale—one likely to find a satisfied audience among readers interested in the immigration experience and life in the U.S. at the turn of the 20th century.