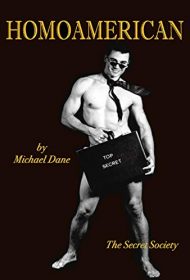 HomoAmerican is an engaging memoir of an artist who has led a richly creative life as a ballet dancer, songwriter, escort, and actor who has lived all over the world.

Growing up poor in San Francisco in the ‘50s and ‘60s, Michael Dane falls in love with ballet and eventually moves to New York City to continue his study, first with the School of American Ballet at Julliard and later with the American Ballet Theater. Here, he also learns about the politics and competition in the studios and is introduced to the city’s gay life, the “secret society” of the subtitle.

His career becomes as varied as his dance steps: He serves in Iran with the Shah’s ballet corps; joins an American experimental dance company, touring the States while adopting a female onstage persona; writes artistic pop songs and is mentored by a European producer, who promises to make him famous while housing Dane in a small Belgian town. After several years of difficult negotiations, he returns to New York, becoming a soap opera actor. His brief work as an escort, to pay the bills, is filled with clients memorable for their awkward dealings or unusual tastes.

As Dane takes readers through the unsettled and formative ‘60s and ‘70s, the author’s evolving sense of identity as he creates and re-creates himself makes for intriguing reading, as does his exploration of his longtime relationship with two men, Gerard and Bernard. While the arrangement sparks much drama over the years, the men remain the loves of his life.

Throughout the book, Dane’s writing provides poetic flourishes and sharp insights. For example, about his disillusioning time in Iran, he writes: “The pageantry and the romance of those Arabian Nights banquets are all gone and I see now that naiveté is a poor excuse for ignorance.”

Nonetheless, Dane has led an interesting life by any measure. Readers looking for a compelling story about a gay artist making his own path through life will enjoy this memoir.