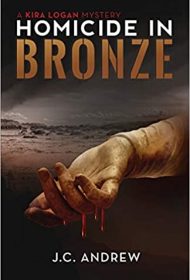 Kira travels to New Mexico at the request of Bill Medford, a medical supply tycoon who wants her to sculpt his late relatives, Mason and Walton Medford, brothers who were medical pioneers in their town. What should be a straightforward assignment lands Kira in the midst of a heated family drama.

Two of Bill’s children object to the sculptures, resentful that Kira’s fee will deplete their inheritances. A local woman, Roselyn Mercado, is even more strongly opposed, as she believes one of the brothers wronged her family long ago. As Roselyn gathers allies both inside and outside the Medford family, Kira begins her work. But someone repeatedly sabotages the statues. Then a worker at the factory is murdered, and Kira finds the stakes are much higher than simply finishing her project.

Homicide in Bronze has the ingredients of a gripping mystery: family dysfunction, an unsavory secret, and a protagonist with an intriguing profession. In this case, however, these parts don’t make a compelling whole.

The novel’s biggest pitfall is its structure. The story unfolds through several viewpoints. This minimizes suspense, as readers are privy to nearly every character’s thoughts, plans and actions. Limiting the story to Kira’s viewpoint as she figures out who is behind the sabotage would better sustain interest.

Additionally, Kira is an oddly passive character for a mystery protagonist. She does refuse to be intimidated into giving up her commission but performs very little actual sleuthing. In fact, Roselyn, clearly intended to be unsympathetic, is the only character who truly comes alive.

Kira’s descriptions of the New Mexico scenery and of her sculpting process add some depth to the novel, but not enough to make up for its drawbacks.