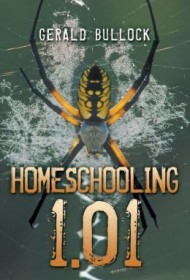 The depth of Gerald Bullock’s sympathy for the victims of domestic abuse is evident on every page of his first novel. A lawyer, retired Air Force officer and doctor, Bullock has spent all three decades of his medical career treating battered women in north Texas, and this glimpse of what he calls the “sisterhood of sorrow” is a full catalog of the their pain, isolation, secrecy and fear.

But impassioned advocacy doesn’t in itself make for good or engaging fiction. In this tale of abuse and retribution, a silent vigilante the authorities ironically dub “Gabby” metes out “Texas two-by-four justice” to four wife-beaters, nearly killing them all. By the time the perpetrator is unmasked, readers are subjected to so much medical jargon, so many repetitious detective interviews and descriptions of bad police-station coffee that the overall effect is numbing.

Evidently inspired by suspense master John Grisham (who is mentioned twice in Homeschooling 1.01), Bullock combines elements of the criminal whodunit, the police procedural and the legal thriller. But this novice writer commands neither the dramatic concision nor the breathless pacing that propelled Grisham to bestsellerdom. And his main heroine, a bruised and terrified Texas housewife named Felicia Jernigan, seems more two-dimensional composite than flesh-and-blood human being.

Bullock’s prose can be stiff. “The ecstasy of their union,” he writes, “formed an invisible shield that the recent events could not penetrate.” It can also be insensitive. Would an otherwise competent emergency room doctor really address a battered woman as “sweetie” and “kiddo”? Should the author describe a formidable nurse as “a very large and very black woman”?

Homeschooling concludes with brief summaries of two actual abuse cases that clearly haunt Bullock. They are unadorned and heartbreaking in ways that his fiction — despite its commitment to the cause — doesn’t quite live up to. This book might be better recast as memoir.