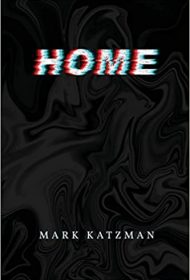 Mark Katzman’s slender novel is a harrowing probe into an unsettled mind and a sustained meditation on the tortures of familial love.

In brief, jagged chapters, many paragraphs no more than a line, Katzman recounts the hazy, surreal tale of a young man, M, returning from a stay in an unspecified clinic. M struggles with a cool and vaguely threatening reception from his distant Mother and Father and is haunted by perturbing visions of scorpions and death.

After the loss of his Grandmother, herself on the edge of sanity, M suddenly has Mother and Father all to himself, and a hallucinatory night passes, filled with cozy chat, storytelling, dress-up, and dancing. But M’s careful staging of their bodies, and his struggle with flashes of terror, hint at a horrifying reason for his parents’ silent compliance, which M knows will have devastating results.

The power of Katzman’s novelette rests not in the plot, if there is one, but in the poeticism of the prose, each line balanced, precise, and landing like an arrow. The flashes of imagery that propel the book are more poignant than hideous as hints emerge of what M has endured both at home and at the clinic, memories that cause a sound in his head “like cords snapping.” The all-night party is as pathos-inducing as it is macabre; “It’s not too late to be a family,” M says, sharing confessions and cigarettes with infectious giddiness as he puts Father in eyeshadow and dons Mother’s lingerie.

The story’s suspense comes from implied crimes committed on and by M. But these arguably have less pull than the spare, sparse prose that rises, at the end, to lyric. Brushing in shades of William Burroughs, Bret Easton Ellis, and the Marquis de Sade, Katzman’s cruelly lovely book never gets lost in its own horrors; instead, it transcends them. But it will still leave a mark.