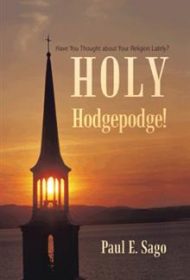 Author Paul Sago devoted 57 years of his life to careers in church pastoring and faith-based university leadership. At some point, he began questioning the source of his personal belief system: Was it his own, or had he unconsciously adopted the religion of his parents and grandparents? In his book, Holy Hodgepodge!, Sago offers readers the opportunity to do the same via his case for the religion of Deism.

The book’s back cover notes that the author invites us “to think seriously about our religious beliefs: what do we really believe and why do we believe it?” This might lead some to expect a balanced discussion of various religious beliefs.  Rather, the author’s intent is to make a strong case for Deism as the most reasonable view of understanding both the natural and metaphysical.

Some chapters cover basic doctrines of Judeo-Christian religion, e.g., the Bible, creation, sin, gods, afterlife, hell, heaven, with Sago explaining the Deist position for each one. In the other chapters, he puts forth other Deist ideas, such as the Bible as mythology, knowing God through nature and reason, the “business” of sin in organized religion, and how to please God through loving others and respecting nature.

Sago’s writing is well-organized, concise and compelling. He includes anecdotes from his childhood and youth, which lend a personal touch. He is respectful of others, discussing famous Deists such as Voltaire, Thomas Payne, and James Madison while refraining from denigrating those who adhere to the fundamental and literal interpretations of biblical traditions. However, he doesn’t hide the fact that he opposes organized religion, finding it to be more concerned with buildings and salaries than helping people, and adamantly rejects the doctrine of original sin (also believing the Genesis record of creation to be pure mythology).

Holy Hodgepodge! would appeal to those seeking to know more about Deism and why Deists reject the major doctrines of Christianity and organized religion in general. Such readers will find much to contemplate in these pages.