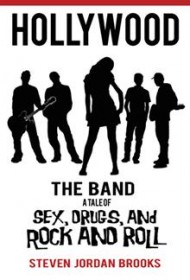 The book’s subtitle says it all: this is a tale where young musicians unite to find a path to music stardom amid the 1970s’ social distractions of plentiful drugs, free love, civil rights causes and gay issues.

After a chance encounter at a university’s antiwar demonstration in L.A., musicians Michael and Jason become friends and, over time, connect with several others who share their passion to form a hit band. There are struggles aplenty as the band plays from venue to venue, searching for the right sound and better opportunities. Constant drug use, casual sexual encounters, illegal and dangerous activities as well as disreputable people threaten their goal.

But there is a bigger story here, as well, as author Steven Jordan Brooks, himself a classically trained musician turned rock performer, explores the way each character’s life is impacted by the era’s seismic cultural shift. As the band travels between popular rock venues and various cities, the author incorporates the counterculture lifestyle around L.A. and San Francisco, including the emergence of gay bars, women demanding their rights, racial issues and more.

Hollywood’s failings include a lackluster start, with sometimes bland dialogue and more explanation than action. Eventually, though, the book hits the right pitch as the characters face weighty issues and unveil dark secrets from the past. From that point, characters are strongly developed and the plot takes hold. Brooks incorporates informative details regarding the complexities of making it big in the music business, and in a nice structural touch, his chapter titles are popular songs from that era that foreshadow the upcoming action (for example, “Take a Walk on the Wild Side” Lou Reed).

While tell-all books abound by existing musicians from this era, Hollywood resonates by painting this changing time with a broader brush that lends stronger historical merit. It likely will appeal both to struggling musicians and those looking to revisit their youth in the ’70s.