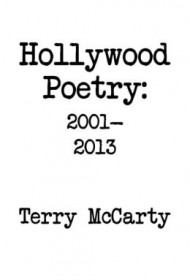 Terry McCarty’s Hollywood Poetry: 2001-2013 presents an interesting and original premise for a collection of poems, as the work is “based on or inspired by [the author’s] experiences in the film industry” as an extra and occasional stand-in for Hollywood stars.

McCarty’s poems are neither melodramatic in tone nor clichéd in description, evading two common poetry pitfalls. However, these poems are also strikingly devoid of imagery, relying almost exclusively on telling and summary details. For instance, in the opening poem “Clint Eastwood in Italy,” the lines “I’m one day closer/ to my ultimate goal—stardom” appear twice. While direct and explicit, the lines don’t engage the senses or paint a picture in the reader’s mind. This pattern continues with similar statements, such as “I threw a lifetime of caution, practicality/ and restraint to the wind./ I decided to become an actor—immediately” and “It was one of those rare good days/ when I wasn’t worrying/ about who I should be/ and where my life ought to be.” Such lines lack the prosody and imagination of more crafted work and read more like jottings in a journal.

When more showing details are incorporated into these poems, the reader becomes instantly more engaged. A strong example is: “AGNES MOOREHEAD IS GOD/ read the spray-painted-in-black graffiti/ on a brick wall located at the back/ of a parking lot on Vine Street.” There are also some formally innovative poems that fire the reader’s imagination, such as “Visiting Day,” which makes good use of the second person, the “Botox Haiku,” and “Icarus’ Itinerary 2004 Version,” a retelling of the myth using the imperative form and drawing from the contemporary zeitgeist.

Overall, this is promising material. The journalistic style of these poems allows for moments of humor and insight. If the author can incorporate sensory details as well as a stronger metaphorical dimension to balance the literal and documentary nature of these poems, his work should have much appeal.