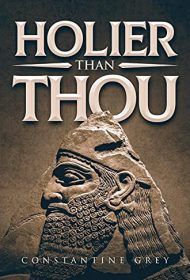 New Atheism is an aggressively anti-religion movement led by authors such as Richard Dawkins and Sam Harris. In their spirit, Constantine Grey offers his critique of the Abrahamic faiths: Judaism, Christianity, and Islam.

Grey begins by proposing that these religion’s scriptures contain threats–for example against non-believers–that constitute criminal acts under “western law.” He proposes that they be edited to excise such “harmful” content.

He then reviews the history of the human species and the emergence of religions from it. Grey discusses several documents from ancient times showing that many ancients were cognizant of the natural causes of events and didn’t require supernatural explanations for them.

Grey goes on to argue that the Great Flood described in the Bible was due to a volcanic eruption on the Greek island of Santorini in 1646 BCE. He also examines religions as business entities that offer services and are compensated for them, recommending that churches should be taxed, like corporations. And he attempts to correlate the degree of religiosity with criminality in various countries. He concludes with a critique of the concepts of heresy, blasphemy and apostasy.

Unfortunately, Grey’s narrative is unconvincing, as he frequently makes a case and then offers the best argument against it, without answering that objection. For instance, after arguing that the criminality in a country correlates with religiosity, he acknowledges that there are “other contributing factors” to the crime rate “such as economics, culture, history, geography and politics.” But he makes no attempt to account for the enormous effects of these many factors. It’s clear he’s aware of counter-arguments against his assertions but skirts them.

Additionally, the book ends abruptly and could have used a conclusion where the author summarized his findings.

Given the lack of depth of Grey’s arguments, those who want a sustained critique of religion by astute authors should turn to Dawkins, Harris and others, as this author makes no significant additions or contributions to their work.