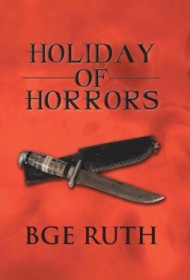 As one might guess from the title, there is a lot of death and dying in BGE Ruth’s novella.

The narrative opens at the funeral of Hilary Bradley, a middle-aged wife and mother who has died from a cancer she didn’t tell her family about until far too late. Hilary has left behind other secrets, most significantly, the details of her kidnapping and escape as a teenager and the deaths of several friends by the same serial killer.

Strangely, Hilary has planned a winter camping trip for the family in Rocky Mountain National Park, the scene of her original abduction, but she dies before this can happen. The family and a neighbor decide to take the trip anyway. Meanwhile, the kidnapper/psycho killer has returned to the Park, and the murders start again.

Coincidentally, a pair of brothers who have killed their father end up at the campsite. Hilary’s daughter Christy falls for one of them, and the psycho killer quickly cuts the other’s throat. This isn’t giving much away, as there are many more slasher murders to come — too many, in fact.

It seems that the author has enough plot elements for a lengthy novel, but she has packed them into a spare 25,000 words. Thus, romances happen, intrigues develop, killings occur and a huge cast of characters walks through the pages without much motivation or logic. Horror should be slowly and deliciously developed; a murder that takes place casually in a paragraph, as several do here, is not very frightening.

The author also has some difficulty with geography and logistics, as errors are made in Colorado distances and directions, and, at one point, the killer is improbably riding a snowmobile at 125 miles per hour in a blizzard.

Holiday of Horrors is an ambitious first book. Although the story shows occasional promising flair in its descriptions and dialogue, it requires re-imagining and expansion in order to make the intended thrills effective.