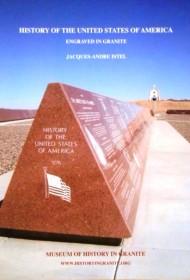 With his History of the United States of America Engraved in Granite, Jacques-Andre Istel proffers both a museum guide and a synopsis of the history and culture of America.

The book is composed almost entirely of photographic plates depicting the artwork and inscriptions on a series of outdoor monuments located in Felicity, California. The monuments in this series are part of a larger memorial design, also using granite, which comprises the museum as a whole. The intent of the museum seems to be to preserve for future generations nothing less than the history of humanity, but the book provides very little context and no Introduction, leaving readers guessing.

Although the scope of the monuments reproduced in Istel’s book is ambitious, the pictures appear to encapsulate all of the notable stages of American history: from Columbus’ voyage and the founding of the colonies, to our modern age with its reliance on technology. Some of the monuments even pay tribute to prominent American artists and writers, including Andrew Wyeth and Herman Melville. While perusing these plates, readers also get a feel for the author’s sense of humor, as he takes time to note (or engrave) quaint peculiarities, such as Madison’s attempt to establish a cabinet post for the secretary of beer.

In all, Istel’s book would serve as an excellent museum guide or memento, but for its aforementioned lack of introduction. The book begins with the plates, without preliminary narrative to give a background for the stones’ engravers or to tell readers where the granite was quarried. Readers don’t know if the author, himself, composed the information on the stones, or if he relied on others to write it. And while there are some dedicatory pages in the middle of the book, there is no substantial explanation of the museum’s history or mission.

These are all details that would be needed to complete this tribute to an intriguing and little-known museum and make it more reader-accessible.