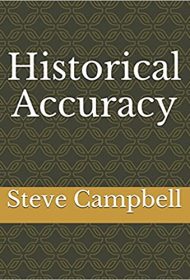 In Historical Accuracy, Steve Campbell offers a course correction for Judeo-Christian believers, highlighting copious examples where scripture and history meet and diverge. The book’s purpose, the author explains, is to question the “foundations upon which some stake their attention to religion and spirituality for protection and sanctity.” The intent is to advance “religious education and traditions in the facts and contexts of accurate ancient history.”

Campbell scrutinizes many persons, stories, and timelines in the Old and New Testaments, including events in Genesis, Moses and the Exodus, and Jesus’ life and teachings. He does so chiefly by comparing scripture with excerpts from primary sources or the works of credible scholars or journalists.

For instance, Campbell shows how Egyptian literature appears in the Old Testament and demonstrates how the Amduat, an Egyptian funerary text, influenced the writing of Psalm 23; both share similar language. He also offers evidence on how the Stoics influenced some New Testament writings and argues that Paul created Jesus Christ and that the Gospels flow from that creation. Campbell contends that there’s no historical evidence for Jesus before Paul’s writings and that the Gospels needed to be created to give Jesus historical context. In the end, is the Bible the Word of God or an amalgam of influential writings from different cultures?

The book is filled with numerous historical details that will make even robust believers run to the library or the Internet to double-check the historical connections Campbell makes. His arguments are logical, simple, and straightforward.

The book, however, can feel dense and choppy as it bounces back and forth between different and often-obscure source materials. And Wikipedia’s many appearances lessen the book’s authority.

Regardless, Campbell delivers an intriguing panoply of historical information that gives a new level of meaning and depth to the Old and New Testaments. While the author’s detective work might not convince believers, fans of Bart Ehrman and John Dominic Crossan will find this an interesting offering.