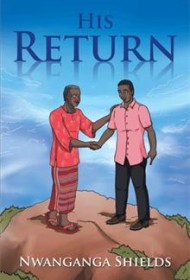 The American son of African immigrants visits the motherland in Nwanganga Shields’ second novel, which offers a vivid portrait of contemporary Nigerian culture and a cogent summary of its past.

The summer before he’s to start law school, Clint realizes he’s tired of unquestioningly following the educational and career path his parents have proposed for him. His physician mother and lawyer father have little good to say about Nigeria and aren’t happy to learn that Clint has decided to visit the country and perhaps defer law school. Nonetheless, they arrange for him to stay with relatives in their native village, Arochukwu.

While there, Clint finds a possible meaning for the strange dreams he’s had since childhood, in which he’s an African boy enslaved to a village chief and later freed to become a prosperous merchant. “We believe that everybody returns after death to live again,” his great-uncle explains, and Clint bears a striking resemblance to his great-great-grandfather Achi, whose history he has dreamed. In a touching late scene, Achi appears in a malarial hallucination to urge his descendant, “Go back to live your life.”

But before Clint does that, he gets an unvarnished look at present-day Nigeria, where wealth is acquired via bribes and remittances from relatives overseas and the gap between haves and have-nots is blatant and huge. Nigeria’s participation in the slave trade, and the practice of animal and human sacrifice, are among the gritty historical facts Clint learns. Yet there’s tremendous vitality and warmth in the world he briefly joins, most notably captured in the author’s colorful account of an elaborate village funeral.

The plot mostly consists of tagging along on Clint’s various encounters with people who explain Nigeria’s customs and history. More exploration into the ways that connecting with his heritage changes Clint’s perspective on his life and future would have resulted in a deeper, more resonant novel. Nonetheless, those interested in Africa will find this book both valuable and informative.