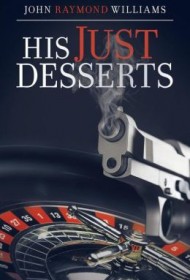 John Raymond Williams’ new thriller is the story of one man’s elaborate tax evasion scheme, which quickly gets out of hand.

Self-made Las Vegas businessman Burt Donaldson is sick of giving so much money to the IRS every year. So he summons the top executives in his company to get some ideas for how to reduce his tax bill. When their solutions come up short, Burt comes up with one of his own. Among other ventures, Burt owns a casino. Despite skepticism from his top lieutenants, Burt decides to recruit an utterly trustworthy employee from another country, arrange for him to win millions at the roulette table and let him keep a small portion of the proceeds while returning the rest to Burt.

Burt thinks he has found the perfect accomplice in Jason Chard. A newly married Australian citizen with a spotless record, Jason fits Burt’s profile exactly. After a couple of principled objections, Jason agrees to participate in the scheme, and he and his wife, Debbie (whom he doesn’t tell about the plan), have the time of their lives in Las Vegas. Everything seems to be going to plan, until events take a fatal turn and Burt finds himself accused of murder.

Williams’ writing style tends to be plodding. Although the prose is competent, it lacks the propulsive urgency of the best suspense writing. But thriller readers may well be willing to overlook this shortcoming, given the novel’s taut and enjoyable, if somewhat implausible, plot, which features a nice twist at the end. The novel’s characters — Burt, his wife Nora, his three lieutenants Bill, Peter and John; and his workplace confidant Jane — are unfailingly entertaining, though not always sympathetic.