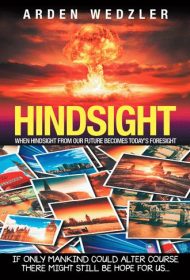 This time-travel novel is about six extraordinarily talented “guardians” who wake up in 2611 to travel back in time to save mankind.

The six guardians awaken from the “Noah 5000” secret underground bunker. The bunker is poised to hold them, and 200,000 others, in stasis pods until the year 5000, but they step back in time in order to “guarantee that the human race survived mankind’s self-induced extinction caused from a global nuclear war” in 2111. Guardians Joe and Karyn fall in love and wonder if, should they succeed, they will see each other if they return to the future.

This is a promising plot in outline, but the story is little more than a political polemic, disguised as a novel. (In the book’s first sentence, the author credits Glenn Beck and Bill O’Reilly’s “penchant for truthful and educational reporting” as his inspiration).

After some establishment of characters, the book offers nearly 100 pages of narration as well as discourse between the guardians blaming all of mankind’s ills on progressivism, “this vile blight on mankind” that made “society weak” and created “feeble-minded “sheeple.” The story includes discussion of a media “so arrogant and blinded by their hatred of conservatism,” as well as distortions and dubious facts; for example, positing the national debt rose 70% during President Obama’s term, handing newly inaugurated President Trump “a political poison chalice by the liberal elite and the Democratic Party.” (The national debt rose by around 40% during Obama’s term; Trump significantly increased the debt as well.)

The novel’s best part is the 20-page manifesto, dubbed the “Positics Constitution,” which details a pathway for humanity’s survival. Unfortunately, it’s impossible to believe the guardians could convince hardened politicians and power brokers to change the things that keep them powerful and wealthy, particularly since the guardians aren’t fully developed, credible characters.

Conservative readers might agree with some of the statements here, but the author’s underlying political agenda creates a seriously flawed novel.