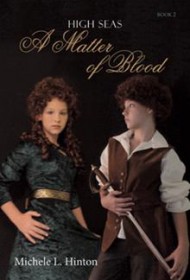 Historical fiction is at its best when its themes resonate regardless of the time in which it is set. High Seas: A Matter of Blood, the second in Michele L. Hinton’s High Seas series, takes place in the mid-18th century, but its themes are universal.

In the introduction to her first book, Hinton explained that her stories came from a trunkful of intriguing journals she found at an estate sale. Whether Hinton was inspired by historical journals or these stories came bursting from her fertile imagination (or both), the result is the perfect setup for High Seas.

The stories revolve around Margaret, a wealthy young Englishwoman who sets up her own fake kidnapping to avoid an arranged marriage. Disguised as a boy, Margaret escapes by joining the crew of a cargo ship. She manages to keep her secret from most of the crew, but she reveals herself to the ship’s captain and they fall in love.

A Matter of Blood picks up where Hinton’s first novel, Cabin Boy, ends. The second book follows Margaret’s struggle to be with the man she loves and still protect her beloved stepson, the son of her late husband. Whom can she trust? Who is her enemy in this story of love, deceit and greed?

Hinton skillfully takes readers back in time. She has a good command of the language and doesn’t waste time trying out dialects or attempting to re-create 17th-century English colloquialisms. She has a knack for dialogue and uses it seamlessly as she tells the story of Margaret, a fearless young woman doing what she must to protect herself and those she loves.

Those who enjoy a good love story, especially one embroidered with the culture of the 1700s, will find themselves intrigued with A Matter of Blood.