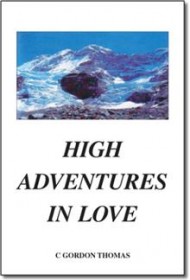 In the opening story, a physicist on an expedition investigating prehistoric huts exposed by an avalanche in the High Himalayas, shares in some startling discoveries about human origins and falls in love with an anthropologist who, unfortunately, is engaged to be married.

The second begins with a car accident that kills one of two anthropologists on the way to a lecture, leaving the other hospitalized, undergoing facial reconstruction and without large parts of his memory. Released with a name recovered from documents found in the wreck but with little else, he slowly puts together a life.

Recalling shards of his scientific past, he joins expeditions that uncover several important finds and returns home to lecture about them. After one talk, he meets and falls in love with a woman but notices another in the audience who triggers strange feelings. Eventually, all is resolved (though somewhat improbably) and true love is discovered.

Despite the author’s obviously sincere efforts, not all of the elements in these stories work well together, and the fiction suffers from odd plot twists, dubious coincidences and stilted dialogue (e.g.: “I really want to go there and see this. Somehow, this seems really important to me.”).

Additionally, readers would probably have been better served had the author focused on fewer themes. Had the wide-ranging narratives been more narrowly cast, the results would have been stronger for both stories. As written, though, with the scattered themes needing (but rarely getting) fuller exploration, the fiction has been stretched a bit thin.

Despite its drawbacks, however, the book offers glimpses into the world of scientific research and speaks feelingly to the shifting dynamic of human relationships.