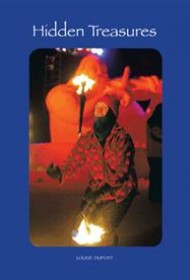 On April 7, 2003, Louise Dupont’s 21-year-old son AndrÃ© jumped in front of a truck on Winnipeg’s Perimeter Highway, throwing his family and friends into the long, painful process of recovering from his suicide. Nearly a decade later, the author compiled this short book as a way to share what she learned along the way, following two guidelines: that it would be uplifting and healing in nature and that it would reflect her son’s “gentle and inquisitive spirit.”

Dupont’s book has the appearance of a children’s tale, with AndrÃ©’s crayon illustrations swaddling the mature content. She introduces readers to AndrÃ© with “Lost in a Storm,” a story he wrote as a second-grader, and ends with sympathy cards drawn by students of Ã‰cole Christine-LespÃ©rance, where AndrÃ© worked. In between, she paints a portrait of her son as a generous, imaginative young man who learned to juggle and loved to bicycle. Dupont describes the gathering storm and tragic day of his death in just three pages before moving on to her search for the consolation she found in the support given by loving friends, the solidification of her own spiritual beliefs and a few messages from the grave contained in his belongings.

The author’s prose is profound in its sparseness, giving readers a sweet, honest reflection of her decision to honor her son’s short life rather than mourn his passing. It leaves readers with plenty of room for self-reflection on the themes of life, death and motherly love. Leaving out the agonizing details about AndrÃ©’s depression, Dupont shares the heartbreaking questions that all suicide survivors must ask: What could we have done to prevent this? What would he have accomplished if he had lived? His suffering is ended; what more could I want for him?

While the story is too personal and specific to AndrÃ©’s situation to appeal to general readers, the book would be useful and recommeded for people working in the fields of suicide prevention and grief counseling.