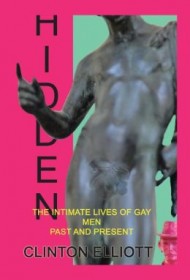 Gay studies programs have become as ubiquitous in the new century as women’s studies programs were in the ‘70s and ‘80s, giving rise to a body of literature that’s extensive, though often uneven. These works are not simply fiction and biography, but increasingly offerings that try to give gay life broader context.

Clinton Elliott’s Hidden falls squarely into that category. It’s essentially a dictionary of notable gay men of the last 600 years and consists of brief blurbs about their lives. Among other resources, the author relies on letters and government records dating back to the time of Cotton Mather. The book is arranged alphabetically rather than chronologically. Hence, the second chapter includes Marlon Brando and British spy guy Burgess, while a later chapter covers William III of England (1650-1702) and the poet Paul Verlaine.

We’re hardly surprised these days when an Ellen DeGeneres or Neil Patrick Harris goes public with their sexual affinities. But from the Renaissance to Richard Nixon’s America, gays who failed to live on the down-low faced harsh treatment, so these entries can be eye-opening. Indeed, some of the vignettes of subjects who were clearly out of the closet in deed or words are quite intriguing, such as blurbs on the Bloomsbury group or Oscar Wilde.

Yet there’s often no convincing proof that many of the people included were gay. A “close friendship” does not a homosexual make. And truth be told, more than a few of Elliott’s subjects were probably clinically bisexual. The book’s subtitle promises an “intimate look at the lives of gay men,” yet its definition of intimacy is broad and not particularly deep.

That said, Hidden remains an immensely readable book. If not quite the tell-all it portends, it tells enough to make one marvel at the sheer number of gays who contributed to the successes and failures of modern history and will appeal to anyone interested in gay culture.