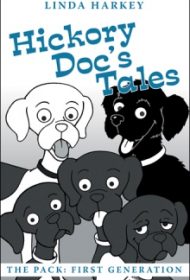 In Linda Harkey’s children’s book, the oldest of five dogs who live at a kennel relates stories of hunting trips, run-ins with porcupines and cacti, and other escapades.

“Doc,” the book’s narrator, is a German Shorthaired Pointer with a solid brown coat. He explains that his breed is known for its ability to hunt, point, and retrieve birds. His brother Zeke is boastful about his speckled coat, insisting it gives him greater nobility. Much of the book involves Doc trying to keep Zeke in line, as he struts his “royal blood,” gets into trouble, and acts rudely. But, Zeke also reveals a selfless side when he helps Doc stop a dognapping.

There’s much humor to be found in these tales: Zeke unwittingly gets sprayed by a skunk, and while aiming to impress another dog, he tries to retrieve a calf only to be met with a herd of angry cows. In another story, Doc proudly offers an unfamiliar prey to his master—an armadillo.

Much of the book’s charm lies in its unique, loveable narrator. When Newt, a Lab at the kennel, sadly realizes he’s different from the others, Doc lists all his positive attributes. And he admits when he’s erred, such as when he gobbled up all the food at a dinner party.

However, the text could use a careful editor. An analogy of Zeke and Doc crisscrossing fields “like windshield washers,” is used twice; in another passage, Harkey repetitively writes: “Suddenly my nose smelled them—the sweet smell of quail.”

Additionally: the book seems to end abruptly, without a final narration from Doc about the pack; although the back cover notes that the book “encourages a host of creative writing opportunities and exercises,” no exercises are included; and the illustrations look like clip art and don’t do justice to the lively narrative.

The book would gain a wider audience with the suggested revisions. Still, children will likely enjoy many of the stories here.