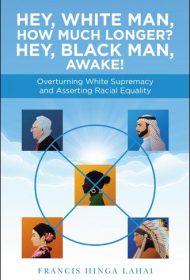 Civil engineer Francis Hinga Lahai outlines the causes of and ways to combat cultural and economic racism in this overview.

Lahai, who was born in Sierra Leone and studied in the UK and China, draws on his world traveling experience to predict an end to white supremacism, in part due to changing global demographics. The author first examines the historical roots of racism, suggesting that colonizers from Rome to Great Britain used a technological advantage to enslave black people, while South African whites manipulated the laws, and U.S. whites used the KKK to enforce racial discrimination. Lahai refutes white supremacy on ethical and scientific grounds, pointing out that “ethnicity and race are social constructs” with no biological basis.

The book then examines economic grounds, suggesting that cultural racism will abate when white and Asian cultures cease exploiting African countries for resources and labor. While bias persists in the refusal of foreign nations to invest in African infrastructure or in consulting firms paying expatriates more than locals, Lahai calls for the United Nations and African Union to underwrite the continent’s prosperity. Lahai concludes by offering an outline for cultural and political transformation that can spur the development of African countries, “rebranding the Black race” to a position of global respect.

While Lahai’s argument is unassailable on humanitarian grounds, the book’s execution is flawed. The blunt historical summaries overlook much complexity and are rife with inaccuracies, such as placing Napoleon in the 1890s. Ethical, religious, and economic appeals are compressed and sometimes confused, clouding the logic.

Furthermore, Lahai’s model for economic and geopolitical success exhorts African nations to look more like white-majority superpowers, and his endorsement of capitalism doesn’t acknowledge that system’s power to sow socioeconomic as well as racial divisions.

While Lahai’s dream for “an environment of peace and mutual coexistence” is compelling, the book’s overall lack of nuance or sustained analysis undermines its usefulness as a blueprint for improving international race relations.