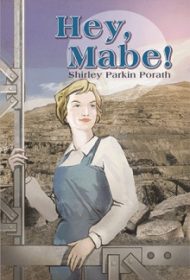 In Shirley Parkin Porath’s historical novel Hey, Mabe!, a girl born in the early 1900s shares tales from her formative years in a remote, disaster-prone silver mining camp in Utah.

According to the book’s Acknowledgments, the story is based on a 50-page manuscript by Mable Knudsen Boberg, titled Copper Dust, as well as her other recollections. Porath has fictionalized Boberg’s life experiences with the addition of imagined dialogue, Porath’s own poetry, and details drawn from Porath’s personal childhood, having grown up near a large open pit copper mine.

Much of the book covers mundane daily events. At school, we see Mabe participating in sporting events and dances and attending classes. At home, she engages in typical chores and discusses things such as the family sharing a round tin washtub for bathing, where only the “first person had the luxury of absolutely clean water.”

The novel occasionally sparks with action relating to historic mine disasters, fires, avalanches, and bootlegging problems during Prohibition. There are also promising glimpses of townspeople, such as the Greek mine workers who gather at a local coffee house to smoke pipes, sing and dance. “Arms held up from their elbows and clasping hands, the dancers circled and snaked around the fire . . .,” writes Porath. Unfortunately, their stories are not developed and they remain one dimensional. Overall, the book suffers from the lack of any dramatic focal point and from dialogue that’s devoid of distinctive voices. Rampant overuse of exclamation points also mars the writing.

On the positive side, the author has scattered throughout authentic and interesting black-and-white photos of the people, town, and mining operations, as well as several actual newspaper articles highlighting events.

While such items may appeal to readers whose families shared similar historic experiences, however, the lack of a developed plot likely will deter a larger audience.