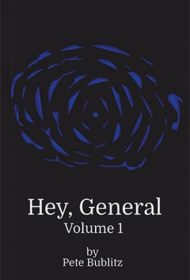 Pete Bublitz’s science fiction novel Hey, General: Volume 1 features a group of women dealing with a strange anomaly that has invaded their island domain and taken possession of one of their own.

Residing in an apartment complex in the Matlacha islands, Janelle and Sophie encounter a destructive aberration that has taken over and morphed into the form of Sophie’s roommate, Mizuki. It slowly reveals itself as an odd entity with reflective, mirrored hair, an accent differing from Mizuki’s own Japanese/English dialect, and a preference of being called “Hey.”

The story is initially set at their waterside residence and the nearby Cape Coral hospital, where the protagonists receive treatment for injuries suffered from this invading force. It continues at local dive bars and other spots. Throughout, these central characters and their acquaintances experience further strange happenings, including bizarre morphing, cryptic messages, attempted kidnapping, and odd phone conversations.

Much of the action is puzzling, and Bublitz’s tendency to introduce new characters without any preface only adds to the confusion, as does the insertion of cryptic phone conversations and voice mail messages. Activity and dialogue is often interspersed with sounds like “BRRRRRRRRRMMMMM” and “CCCRRRRRSHHHH” that give the dramatics a superficial comic book feel.

The story is divided into short chapters, though not specifically labeled as such. Each few pages concludes with a brief notation discussing the characters and what happened within the segment; such commentary might be better placed at the beginning of chapters to help orient readers to the coming action.

A few bits of humor offer momentary enticement: Consider the hospital doctor who needs to contact her hair stylist to procure equipment for hair removal on the supernatural entity, which sports an unnatural hair phenomenon. But these moments are too few to compensate for the book’s problems.

While the story’s premise has some potential, the overall narrative is tangled and the characters fall flat. Perhaps some clarity will be gained as Bublitz plans subsequent volumes.