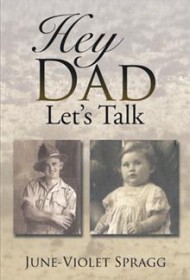 A daughter whose father died in World War II when she was just a toddler shares an imagined one-way conversation with him about the troubles in her life in this slim, uneven book.

June-Violet Spragg, who was born in Auckland, New Zealand, was just two months old when her father went to war. He was killed in July, 1942, during battles at Ruweisat Ridge in Egypt, where he is buried in a war cemetery. In her book, the now elderly author recounts “some pleasant and some quite nasty” events from her life after that time. She mentions, for example, her frightening encounters with sexual predators, yet also details some happy times playing at the beach with her older brother, Fred.

Here and there, Spragg remarks that she wishes her dad had been around to protect and guide her, especially in helping her to understand men and their untoward actions. She goes on to discuss her later years and marriage to a man who, though kind, drank and smoked too much, which ultimately led to a severe stroke, seizures, and death.

This highly personal book is short on creative or charged details and lacks the emotional resonance to transport readers. It generally rambles from one scene to the next regarding the author’s experiences and neglects to develop a clear picture of her father, aside from noting his numerous war medals, the details of which are left unexplained.

While this is clearly a heartfelt attempt to reveal the depth of loss the author felt throughout her life, the lack of structure and flat writing style causes it to read more like a prolonged chat with a friend, rather than a polished work that holds appeal for general readers. Aside from family and friends, it is unlikely to draw outside interest.