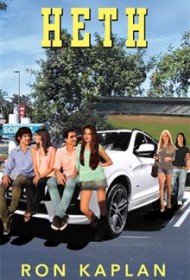 In this young adult novel, author Ron Kaplan attempts to capture all the drama of high school.

Mary Martino, who has been attending a private Catholic high school, switches to a public school in her senior year. She falls in love with David Goldfarb, the Jewish star quarterback at her new school and a habitual pot-smoker. The straight-laced Mary and the free-wheeling David have no end of obstacles to their happiness, involving their religions, parents and college decisions. Adding to the stress, David must lead the team to victory in the city championship – this is high school, after all.

Kaplan, a former New York City high school teacher, has done many things right: the story is easy to read, and he has captured teen-speak faithfully, down to their “all about me” and “I’d die without you” mentalities. Yet the novel feels dated, as if it were written a while back and never revised. If it is set in the present (we don’t know), David’s father, a Holocaust survivor, would be old enough to be his grandfather. No one has cell phones or computers; one character even looks up a number in a phone book. Even the focus on pot-smoking seems one beat behind the current drug situation.

The story seems to have the innocence of a much earlier time, right down to the tragic ending (think Natalie Wood and James Dean), yet it delivers some modern-day sensibilities, too.

These inconsistencies are likely to be off-putting to modern readers. However, the book might interest a reluctant teenage reader enough to motivate him or her to put down the smartphone. The football sequences are particularly well done, and there are some universals; anyone, for example, can relate to David’s encounter with his “helpful” counselors. As for the odd name of the book, the meaning of which isn’t revealed until the last page? The recalcitrant teen might even be motivated enough to Google the explanation before the book is over.