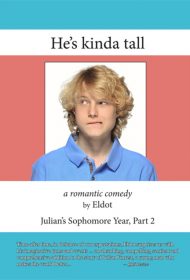 He’s Kinda Tall is author Eldot’s latest installment of the adventures of Julian, a gay boy growing up in small-town North Carolina during the early 1960’s.

Picking up from the last novel, it follows the rest of Julian’s first semester in high school, as he’s chosen to help Kasey, a Black boy who will be the first to integrate Julian’s school next semester. Kasey’s family is moving from Boston so that Kasey’s scientist father can help develop a cure for a man named Swann’s medical condition. As Swann, a millionaire, helps ensure an easy transition for the family and community, he comes to know Julian and his incredible skill at drawing.

Julian immediately befriends Kasey, knowing from his Boy Scout days that “everyone needs a buddy.” His friends support him, helping plan the school assembly to introduce Kasey and eating with him at a whites-only restaurant. Julian brings Kasey out of his isolation, joyfully teaching him how to make pancakes at a sleepover.

The sex scenes display a spirit of playfulness and tenderness, employing boyish humor. When some of Julian’s friends take a weekend camping trip, they mix sex with tickles and fart jokes. Eldot skillfully combines innocence and experience within the boys, showing both their eagerness for exploration and sensitivity concerning relationships. They have no guilt about sex, just an awareness of the need for discretion.

While all the books in the series can stand alone, several sub-plots here are interesting enough to inspire titles of their own.

The narrative contains one minor distraction: Since Eldot explains in a prefatory note that he tried to “lessen or sidestep the offense inflicted by” 60’s racial terms, it’s jarring that some characters think of Kasey as “negro,” although the word is never spoken aloud or used pejoratively.

Nonetheless, with its well-drawn characters and detailed, nuanced understanding of how boys think, this novel will appeal to readers interested in coming-of-age scenarios told from a gay perspective.