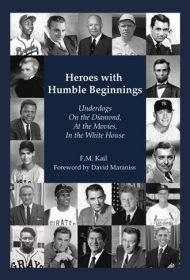 Author F.M. Kail examines the ever-fascinating topic of the underdog in his interesting compendium, Heroes with Humble Beginnings.

Kail focuses on 21 famous athletes, actors and presidents, positing that in overcoming challenging childhoods, they developed the character that took them to the top of their fields.

Baseball great Ted Williams, for example, had a father who was distant and uninvolved in his son’s life and a mother devoted to her work with the Salvation Army. Largely on his own and searching for a father figure, young Ted was mentored by men in his neighborhood, who nurtured his love of baseball.

Andrew Jackson lost his parents and brothers by the time he was 15, leaving the future president—“a natural hellion”—alone in life. He became a bully and a fighter, traits which one might assume helped get him elected.

Clark Gable’s mother died when he was 9 months old, and his father spent most of his time away from home. By the time Clark was 2, he’d had four sets of caregivers. He overcame the attendant insecurity by turning inward, becoming an accomplished musician and skilled athlete. On his own at age 17, he saw his first real films and discovered live theater, thus launching his career.

While the book is built around these intriguing biographies, the author also offers scholarly analyses of the underdog phenomena, such as the writings of Malcolm Gladwell and Angela Duckworth. Gladwell posits that what makes someone an extraordinary overachiever is “practice.” Duckworth believes that “effort” —what she calls “grit” — turns potential into success. People need both, Kail concludes, “to produce greatness.”

Kail devotes more than 100 pages to statistical analysis—what are the chances of becoming a baseball star, top-flight actor or president?—and appendices, bibliography and end notes. The analysis adds immeasurably to the book.

Overall, Kail has delivered a well-written, well-researched and engaging book that should appeal to anyone who ponders what it takes to forge success.