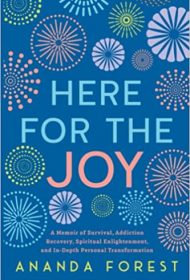 A 20-something man from a pedigreed New England family, scarred by his mother’s abuse, hears Bill Moyers interview Joseph Campbell on PBS and begins a decades-long journey to follow his bliss.

At 29, the author embarks on his journey when he’s struck by Campbell’s command to “Follow your bliss.” He leaves his law career for a simple, rural life with his wife and their infant son.

As he seeks fulfillment hunting, fixing cars, making moonshine, taking “magic mushrooms,” going on vision quests (three days in the wilderness without food or water) and more, he also ruins his marriage with constant infidelity. He marries again, and he and his new wife create Spirit Hollow, a shamanic retreat. They have two children and start an intense, ongoing relationship with the Indian gurus Maharaj-ji and Amma.

Ruining his second marriage by cheating, he marries again and changes his name from George to Ananda (“the bliss of being”), then drifts yet again toward another woman, adding sex addiction recovery to his AA 12-step work.

Finally, by story’s end, his decades of study of shamanism, Buddhism, Hinduism, the lives of saints, Eckart Tolle, and other spiritual masters allow him to process his painful relationship with his parents to experience a moment of joy.

Ananda tells his story well, taking readers on a never-dull journey of highs and lows. He’s compassionate toward his mother and his own addiction struggles. When he feels joy (in the wilds of New England and Hawaii, in the embrace of a holy healer, when spiritual truths are revealed during a vision quest, etc.), readers do, too. Still, he draws on so many spiritual influences that it feels as if he’s constantly trying on new costumes to see if this “character” feels right. He seems to have latched onto every spiritual trend of the last 30 years.

As a guide to enlightenment, this is a grab bag. As one man’s story, however, readers should find it compelling.