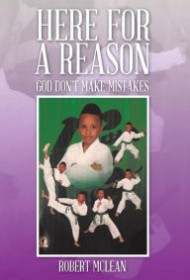 Robert McLean survived some harrowing ordeals at the hands of white racists, a sadly common occurrence for African-Americans in the American South of the 1950s.  Here For A Reason details these episodes, along with the heartening moments he experienced, offering fascinating stories that are hampered, unfortunately, by an overall lack of editing

McLean’s memoir roams from roughly age five to the present, also featuring some satirical writing apart from the main story. He tells how his outsized sense of humor and need for attention got him in trouble even as a young boy. Smart and unafraid to show it, he’d advise his grandmother when shopkeepers — who treated her kindly only because she owned a coveted plot of land in town — shortchanged her. Whites in town weren’t pleased by his defiance and feared he’d tip her off about their desire to take her property. Eventually the Ku Klux Klan planned to lynch young Robert for this transgression, but he hid and evaded capture. He continued to face discrimination, but the resilience and humor he brought to his life never faltered.

Troubling stories such as the KKK episode are softened by tall tales, prison humor and filthy jokes McLean hears at the billiard hall from adults who are in and out of jail and on and off the drink. The main narrative, however, is often interrupted by confusing non-sequiturs: McLean makes parenthetical references to the jokes of stand-up comics, mentions more than once that his idea for the “park and ride” was stolen from him (although he never details how), and includes two letters to publishers that would normally accompany a manuscript submission. The book cover is a photo of his grandson doing karate moves, which, while adorable, doesn’t relate to the text at all.

Here For A Reason needs thorough editing to clear out misspellings and irrelevant side commentary. If freed from needless distractions, these stories would be riveting.

BlueInk Heads-Up: Historians willing to sort through the mix of material here will find some fascinating first-hand accounts of life under segregation.