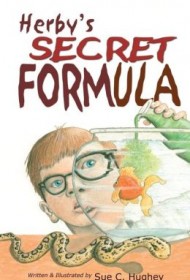 Hughey takes a clever approach to the premise of the boy who shrinks, then relies on his wits to survive in a big world in this first in a promising middle-grade series.

A grade school boy named Herby accidentally spills a potion he’s developing for the science fair into his bath and shrinks to 6 inches tall, setting off a series of events that require all his Boy Scouts know-how to get him through. After being pulled through his bathtub drain, Herby escapes off his roof, only to be dumped into a recycling truck. He is then locked in a cage by a confused old man who thinks Herby is a leprechaun. After Herby manages to sneak away, he’s caught by a bumbling criminal and flees into the wilderness, where he relies on survival skills to get home.

Hughey is inventive at getting Herby out of scrapes: having him use a pencil eraser as a brake while sliding down a staircase baseboard or build a pontoon boat out of soda cans, for example. Yet some of the dialogue, especially involving Herby’s father, feels false. That’s unfortunate, since Hughey rarely falters until certain characters converse. She also shows real talent at illustration. (Several of her drawings are as engaging as those in Andrew Clements’ books, including her cover design of Herby’s face magnified through a fish bowl.) Seeing the scope of Hughey’s artistic talent leaves you wishing her writing were equally consistent–and hoping she’ll find a gifted editor to make this the standout it could be.