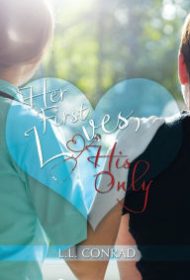 The story of a young woman finding herself, Her First Loves, His Only is boundary-pushing erotica with a heart.

Scarred from past sexual abuse, Karley aims to keep to herself and avoid contact with other students at the university, especially male. She doesn’t realize that she has caught the attention of Luc Genres, a handsome, confident classmate. Although he doesn’t know her, his interest appears to border on obsession; he often follows her when she is alone, to keep her safe from harm.

Eventually, his concern for her safety becomes warranted, and when Karley is attacked, he’s there to help. The incident forges a bond between the two, and soon they are  exploring their sexuality in increasingly edgy encounters. When a tragic event pulls the couple apart, Karley has relationships with other men, but Luc remains in the periphery. She begins a career as a nurse, and is later blackmailed into becoming a government assassin. While this may seem like an eye-catching twist, it’s her continued sexual awakening, rather than any murderous activities, that takes center stage throughout the book.

In addition to the characters’ unique and varied sex lives, the plot features several surprising twists. The author doesn’t shy away from difficult subjects like sexual abuse, rape, violence, and even murder, and Karley’s assassin work is a particularly compelling development. However, at times the story skips forward weeks and even months, and the timeline is difficult to follow.

Overall, however, Her First Loves, His Only is a unique tale of sex, love, and transformation for fans of edgy erotica.