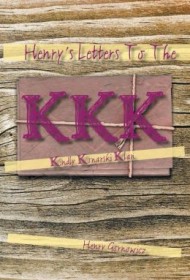 Author Henry Gornowicz has been chronicling his travels and travails for years. Now, in Henry’s Letters to the KKK, he collects several of his amusing missives in one volume.

Gornowicz details trips to such places as Costa Rica and Copper Canyon in what seems to be a cross between a personal diary and letters home to family. He utilizes a style reminiscent of Robert Benchley with a touch of columnist Herb Caen thrown in, telling jokes with solid timing and boozy bonhomie. For example, on a flight gone awry, he writes: “Eventually the fourteen (14) year old aviator asked the passengers if any one [sic] had been to Cleveland before. I cautiously raised my hand and he requested that I inform him when we got close.”

He makes up outlandish names and character traits for some of the people he writes about, but nonetheless preserves the facts about itinerary, meals, and so forth, so even readers outside the family feel included.

Despite some highlights, however, the author’s humor is likely to put off many readers. The title offers a clue about where the book takes an unpleasant turn; it’s a long reach for a joke that’s arguably not funny, and by no means the only time this happens. Crude comments about Mexican children and mocking a Chinese doctor’s accent (“She is always kind enough to ask if I would like “fly-lice” with the EKG” ) are like a drink thrown in the face of the reader and quickly grow tiresome.

These letters must have been popular with the author’s family members over time; by story’s end he’s asking them to contribute to cover postage expenses. And that’s where the book’s appeal lies. General readers may find some of these stories amusing, but the book will most likely be a well-received memento for those who were there for the events described.