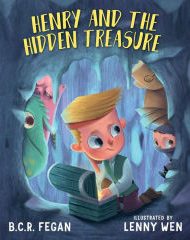 A boy plots to hide his treasure from his sister, but realizes that sometimes it’s more fun to share, in B.C.R. Fegan’s delightful picture book Henry and the Hidden Treasure.

Henry’s “treasure” (his parents call it “pocket money”) is precious to him. But, as Fegan amusingly writes, “Henry has a problem. His parents call the problem ‘Lucy'[..] “. In Henry’s vivid imagination, “his little sister is really a secret ninja spy, sent to steal his treasure.”

Henry has a ten-step plan to protect his treasure, however, which the bulk of the book showcases: He imagines the treasure placed inside a secret cave filled with booby traps, superheroes, soldiers, and monsters and guarded by robots, a dragon, and Henry himself, armed with a laser gun, as a final barrier. In Henry’s imagination, Lucy bypasses every obstacle—not to steal Henry’s treasure, readers learn, but to give him a hug. Henry’s guardians are revealed to be toys in his roped-off room, and Henry decides he will take his parents’ advice and put his treasure in a bank—after buying Lucy an ice cream.

Fegan’s tone is just right, portraying Henry as a likeable young boy who sees his younger sibling as a pest. The vibrant illustrations are utterly charming and sure to bring a smile as Henry’s expressions convey his deep concentration on the mission at hand.

Offering an uplifting message that siblings should be appreciated, not just avoided, Henry and the Hidden Treasure is a charming read for young boys—and perhaps their younger sisters as well.