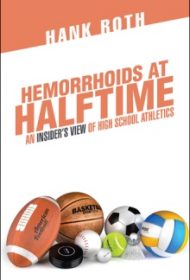 Every adult who has been intensely involved with high school sports—whether parent, coach, official, or administrator—knows the behind-the-scenes activity can be even more dramatic and entertaining than the actual gameplay.

Having served as a coach and athletic administrator for 55 years, Hank Roth easily qualifies as the person to provide what Hemorrhoids at Halftime’s subtitle promises: An Insider’s View of High School Athletics. But Roth delivers much more than that: over 100 stories—some extensive, others essentially anecdotes—about the weirdest, worst and most hilarious things he dealt with or witnessed over his career in Westchester County, New York.

Roth also provides well-reasoned analysis on topics such as the growing influence of women’s sports and how the Title IX federal law affected it, what winning truly means, and how growing awareness of concussions’ long-term impact is affecting football and other sports.

Each subject is thoughtfully explored, but what makes the book so fun is Roth’s uncensored retellings of astonishingly rude and crude real-life events. The coaching tales are particularly shocking. There’s the coach who tried to select teams by declaring, “You Jews on one side of the gym and you Christians on the other”; another who angrily flung his clipboard so hard, it knocked out the assistant coach for several minutes; yet another who abandoned his team mid-game because he was running late for an Atlantic City gambling excursion. This isn’t a book for kids: Roth liberally quotes adult language by coaches, parents, and players, and includes salacious stories as well.

One could argue the book is a bit too broad in scope. The straightforward takes on prep sports issues might be better served in their own collection.  Regardless, no part of the book is ever less than interesting. In addition to being a lively read, it impresses with its clean, journalistically sound writing.

Anyone with a strong interest in a (decidedly uncensored) view on youth sports will find Hemorrhoids at Halftime a sure-fire treat.