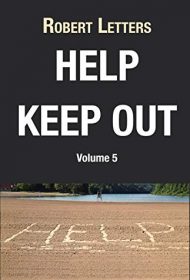 Letters states that the poems, all untitled, are inspired by East Asian forms such as “haiku, senryu, tanka,” which are Japanese, and “sijo,” which is Korean. These forms traditionally addressed intertwined themes such as the natural world and impermanence.

Letters’ weaves a mélange of ideas into his work. Taken overall, the poems read somewhat dreamlike, with nightmarish scenarios fading into sweet moments in nature or love and then back to darker moments. Historical scenarios are juxtaposed against modern issues.

For example, poems about the American Revolution (“The General was courageous/ until finally they shot him…/ he never let his redcoats/ move from their huddled line”) lead into several love poems, which precede this troubling moment: “He died from binge drinking/ in the arms of his new young wife,/ choked on his own blood…” Although delivered in the order in which they were tweeted, the arrangement somehow feels intentional, heightening the idea that the present is always informed by the past, the bad inextricable from the good.

Letters’ work is written gracefully, often with distinctive, interesting details and poetic movement, as in: “Scouring wind widens the channel/ between will and abandonment.” (The repetition of the “w,” “d,” and “n” sounds have a musical effect, and the image of a “channel” is an intriguing way to express the difficulty of seeing something through.) Lovely examples of transience, displaying the beauty and melancholy of fleeting moments, abound: “Sunset on the marsh -/ the retreating tide will soon/ restore green grasses.”

While the book would benefit from being separated into three distinct volumes, and poem titles would be helpful, this is an intriguing, well-considered work. Those who enjoy the spare style of haiku will find impactful, thought-provoking pieces here.