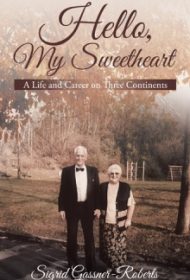 Sigrid Gassner-Roberts, who built a fulfilling professional teaching career on three continents, shares this intelligently written personal story of unexpectedly finding love at 42, then learning to dramatically adjust her life after her husband suffers a stroke a mere four years later.

Sitting near her husband, Lloyd, as he lay in a coma in a Viennese hospital, the author would recount stories from her early life and their time together to reach him subconsciously. Those memories, captured here, begin with her years in New York as a young Austrian student on Fulbright scholarships.

Among her recollections are her surprise at the undisciplined American college students, the complexity of race relations, and working as a dog walker for President John Kennedy’s best friend, Lemoyne Billings, who entertained the likes of Jack Paar, Lauren Bacall and Andy Williams.

The author met Lloyd after moving to Australia and was stunned by their sudden, intense romance. Lloyd lived for 32 years after his stroke, and the memoir recounts the difficulties Gassner-Roberts faced finding specialized help while managing to fulfill her professional teaching career in Germanic languages and literature, a niche in high demand globally.

The narrative’s highlights are its interesting stories of people and places and the author’s worldwide adventures; it often reads like an engrossing travelogue. For example, at the Austrian Club where compatriots met while living in Australia, the author describes dance nights when “the Schuhplattler was usually performed by young second-generation Austrian boys, and the girls showed the dirndls their parents had brought.”

But while she professes her deep connection to Lloyd—“We have lived and loved, laughed and cried, struggled and won, suffered and overcome many things in our lives”—the author only scratches the surface of his personality and quirks pre-stroke, leaving readers longing for a more fully developed portrait.

Nevertheless, this memoir is engaging in its in-depth look at the life of a woman who grew through tragedy in ways she never would have imagined.