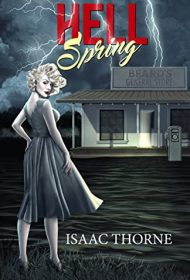 In Isaac Thorne’s horror novel Hell Spring, a demon preys on citizens trapped in a store in the aftermath of a flood.

As the story begins, a hound of hell escapes Hades and somehow ends up in 1955 rural Tennessee during a 100-year flood. The demon dog is a psychic vampire; instead of drinking blood, it survives by eating people’s emotions: fear, shame, guilt, etc.

Meanwhile, because of a washed-out bridge, seven citizens of Lost Hollow are trapped in Beard’s General Store. Each has a secret “sin” that causes guilt and shame. This attracts the hound, who makes its way overland to the store.

The hound soon discovers it’s a mind reader and shape shifter. When it reads the mind of an adolescent boy in the store, it discovers he’s ashamed of his obsession with a nude calendar picture of Marilyn Monroe. The hound knows its monstrous appearance won’t be welcomed, so it shapeshifts into the Marilyn Monroe in the calendar. When the stranded citizens discover a washed-out, naked “Marilyn” on the porch, they bring her in to save her.

As the hound feeds on the emotions of the seven, it can control time. Thus, the folks notice themselves aging during what seems to them one night. In reality, decades pass as readers wonder who will finally figure out that “Marilyn” isn’t what she seems.

The story is packed with tension and credible characters that propel readers forward. It also has some flaws: The first chapter, describing the hound’s version of hell, is unnecessarily graphic, which could deter readers. Also, these passages don’t match the tone of the rest of the novel, creating a jarring reading experience. Additionally, questions remain: How did this hound escape and not the others? Why doesn’t the infant age? Why aren’t the people discovered inside the store as real time passes?

Despite these shortcomings, Thorne delivers a unique approach to the horror novel, which fans of the genre will appreciate.