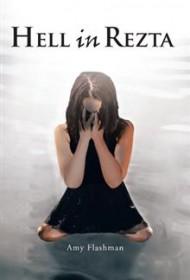 Hell in Rezta is a young adult fantasy filled with bravery, intrigue, love and friendship. When Shana’s mother abandons her, she is to be raised by her father, a horribly violent and abusive drunk. Shana lives in terror and pain, constantly haunted by dark dreams of a place she does not recognize. This place is Rezta. When Shana attempts to escape, her father brutally murders her and laughs as she dies.

Shana’s death is just another event in the history of the world called Rezta. She was destined to be a key player there, perhaps the savior of this world, where peace and life are threatened by the evil Morphius and his followers. Her death is only the beginning of her new life in this strange reality.

Brave and stubborn from the beginning, Shana must learn who she is and how to master the powers that have been passed to her by her mother, Krystith. She must embrace her destiny, learn to fight and decide whom in her new world she can trust. On her journey she will face unspeakable violence and betrayal but gain friendship and true love.

Hell in Rezta is fast-paced and engaging. From the shocking first scene, the reader is instantly drawn in. The plot becomes a bit confusing at times, with twists and turns that keep the story interesting but leave the reader wondering where the narrative is going. There are many great characters, each playing an important role, but because they often switch sides, it is hard to keep track of which characters are fighting for which cause.

Eventually, many of these questions are answered but many more are posed, leaving the door open for a sequel.