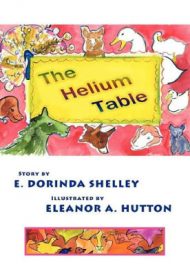 A table floats up to space in the children’s picture book The Helium Table.

Kath, the narrator, explains that her dining room table has been covered for years by junk mail, books, and newspapers. Her father warns that it’s a helium table, and will float away like a balloon if it isn’t weighted down. When Kath’s mother cleans off the table, sure enough, it floats through the screen door and outside, with the dog, cat, and two birds on top of it.

Mother calls for the farm animals to jump on the table to keep it down, and they come running: donkeys, chickens, and ducks, among others. Their efforts fail, and the table, loaded with animals, floats into space. There, the animals wave to a space shuttle and try to catch “space junk” to make themselves heavier. Finally, the table floats down to the house, where Father tells everyone “Don’t ever clean off this table again!”

The Helium Table presents a light and refreshing premise, but several issues detract from its effectiveness. Some of the concepts—particularly “space junk” and “space shuttle”—are likely to be foreign to young readers. Better explanations would help reader comprehension.

Additionally, while Hutton’s art is colorful and dreamlike, inconsistencies abound. In some illustrations, the table looks bigger than in others; in some, the animals are crowded cheek-to-jowl, while in others there’s considerably more space. The animals are drawn with odd proportions to one another (e.g., in one picture, the turkey looks nearly as tall as the horse), and Hutton inexplicably omits some creatures on certain pages, which might confuse youngsters.

An isolated “sidebar” image at the bottom of each page, typically a reframed part of the larger illustration, also distracts from the main image and story.

Some revision would improve the book’s presentation. Still, it’s largely entertaining, and children will especially appreciate the story’s whimsical nature.