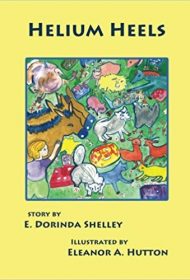 An addition to a series of helium-inspired, magical-realist tales by Shelley, Helium Heels returns to the farmyard where, in a previous story (The Helium Egg), a floating egg hatched five colorful ghost babies. In this tale, the ghosts scare a skunk, who sprays them with its odor. The ghosts are subsequently told by their adoptive mother to sleep near the donkeys because the smell is so bad.

When the ghosts learn the donkeys will have their hoofs trimmed the next day, they decide to play a prank by painting the donkeys’ hoofs with red paint. Unbeknownst to the ghosts, the paint is made with helium, and it causes the donkeys to float into the air. To avoid giving the ghosts satisfaction for their prank, the donkeys pretend to enjoy the occasion, dancing daintily through the pasture. The next day, inspired by the donkeys’ apparent joy, all the farm animals decide to paint their nails red and host a dance party.

Even more than The Helium Egg, this story delivers one surprise after another. While that tale succeeds in building anticipation, however, Helium Heels lacks the same sense of progression. The skunk is unconnected to the rest of the story, except that it provides a reason for the ghosts to sleep with the donkeys. The existence of helium paint remains unexplained for the entirety of the tale, and the party at the end lacks resonance and seems to reward the ghosts for bad behavior. Additionally, the origin of the ghost babies is never explained; readers must have knowledge of The Helium Egg to understand how they came to be.

Ultimately, these faults overshadow the story’s uniqueness as well as its accessible diction and colorful illustrations. Imaginative but scattered, Helium Heels delivers an unapologetically original story that never quite takes off.