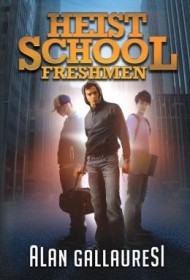 Protagonist Angelo Bastillo already has his share of problems as he starts high school: His girlfriend has dumped him, his classes are boring, and the Trumbull Twins, who have bullied him throughout his school career, have just been released from juvenile detention. But when Angelo discovers a cell phone with mysterious text messages in the back of his new locker, he finds himself embroiled in a high-stakes adventure.

Angelo and his two best friends figure out that the phone belonged to Calvin James Connor, a notorious former student now in prison for dealing drugs. The three boys also realize that when he was arrested, Calvin had about $19,000 he had yet to trade in for more product – and that the money is hidden in the boiler room of their school’s Old Building. Inspired by classic spy films and World War II escape movies, the trio decides to steal the money for themselves.

Under the tutelage of a mysterious upperclassman known as “The Saint,” they recruit a gang of fellow misfits, including an injured football player, an actress with a bad reputation and a computer geek, to plan the perfect score.

Heist School Freshmen is immensely entertaining and perfectly geared toward a middle-teen audience. Gallauresi balances character development and a suspenseful plot, and Angel’s pitch-perfect first-person narration conveys the adolescent sense of simultaneously feeling ready to take on the world and being in way over one’s head. The novel’s good-natured, mildly raunchy (equivalent to a “hard PG-13”) style and satisfying but sequel-ready ending should endear it to even reluctant teen readers.