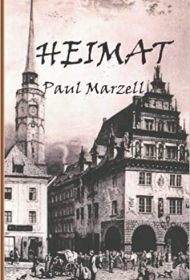 Heimat is a sweeping historical novel set in extraordinary times that follows the life of a German immigrant as he makes his way in America.

In 1929, Matthias travels from his hometown of Neisse, Germany, to America, dreaming of opening a bakery. On the voyage, he meets other Germans, all moving for different reasons, as well as an American diplomat returning home from a mission. This sets the stage for lifelong friendships, as Matthias struggles to find his place in his adopted country, first working in restaurants, later in a shipyard and finally realizing his dream of owning a bakery.

Throughout, he receives letters from his mother and sisters back in the heimat, or homeland, telling him about the Nazis’ rise to power and Germany’s massive changes.

The novel skillfully captures the immigrant’s experience of arriving in an unfamiliar place and having to learn the new culture. Moving into a boarding house in New York City, Matthias discovers on the fly his new home’s quirky rules, such as different eating times for those living on different floors. Visiting Philadelphia after Prohibition’s repeal, he learns about Pennsylvania’s “blue laws” forbidding alcohol on Sundays—as well as ways around them.

The book also illustrates, through Matthias’ family’s letters, ordinary life and attitudes in Germany during this time. His mother frequently hopes he will return home and worries that he might not be learning proper English from his black co-worker, who teaches him. She approves of much of the Nazis’ policies, including their annexing neighboring countries, and even ends her letters with “Heil Hitler.”

The dialogue sometimes unnecessarily repeats what has already been dramatized and can feel long and clunky when providing information. Additionally, tenses often jarringly change from present to past, and the text contains misspelled words, including “Negro” (spelled “Negroe”).

Despite these issues, readers interested in fully human characters and an extensive historical story, as well as a deep look at German culture, should enjoy Heimat.