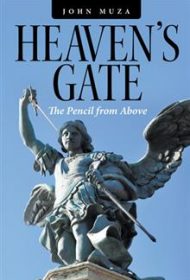 Heaven’s Gate is a collection of brief, faith-based teachings by veteran John Muza for those seeking inspiration during difficult times. Exploring biblical stories such as the origin of sin, the birth of Jesus, and angels and demons, these brief passages (usually just over a page) provide both Christian inspiration and life guidance. They also cover themes such as pride, anxiety, and forgiveness and offer general tips, such as how to save money for retirement.

While the author’s aim is admirable, the text is hampered by many issues. Most of the entries are comprised of simplistic blanket statements strung together in what often seems to be random order. For example, a piece titled “Suicidal: Extinction of Being” loosely discusses those suffering from extreme mental anguish. But the author’s meaning is quickly lost as he throws out a host of consecutive religious bromides, such as: “All life is sacred in the eyes of God. In God we trust, born in his likeness. The body is the holy temple of God…Magnify your life in the words of the Lord.” Readers are offered little, if any, context or real-life examples to make the lessons concrete. Eventually, the many abstract statements become numbing and ineffective.

Frank discussion of a few controversial subjects, particularly abortion (which the author calls a “mortal sin”), will be offputting for many. And some chapters appear outdated, such as one that declares as evil children’s franchises such as Furbies and Teletubbies, long after their popularity has dwindled. The pieces are also repetitious, covering Adam and Eve and the Garden of Eden at least half a dozen times, sometimes even repeating exact statements.

As a result of such issues, many will find the book wearying. Christians already well practised in their religion, and who agree with or can overlook the more controversial passages, may discover random moments of inspiration here. Most others, however, will find this book too generic to illuminate and should seek inspiration elsewhere.