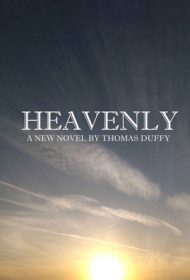 In Thomas Duffy’s novel Heavenly, protagonist John lives a life of no consequence, dies, and then is given a second chance to discover love and meaning in the body of a man named Peter.

The book begins by establishing John’s “lonely existence” in New York City. When John is killed by a stray bullet at the Times Square train station as police wrestle with a suspect, he sees a white light and then meets God and his “officer” Andrea. After telling Andrea that he wants another chance at life, he’s reborn as Peter.

Peter functions in society only a hair better than John. He drops out of college, spends significant time unemployed, has trouble maintaining relationships, hooks up with a prostitute, and is generally insecure and directionless. Even God and Andrea look down on Peter as “a lost cause.”

Characters who are potential love interests for Peter quickly come and go. Early on, he has an “attachment to Sarah [that] seemed quite unusual to him.” But Sarah soon disappears entirely from the narrative. Peter is then infatuated by a string of others who might be “the one” but then never appear again—until Peter finally seems to find the love of his life.

A potentially interesting moment appears when Peter runs into the deceased John’s sister and daughter. But other than Peter feeling a connection with the sister and attraction to the daughter, nothing significant happens.

Eeyore-like Peter is an unsympathetic character, and while Peter’s love life provides enough interest to hold readers’ attention for at least half of the novel, ultimately Peter’s inability to make good decisions becomes wearying. For example, Peter is barely phased when his ideal girl, a prostitute, returns briefly to her “career.”  In fact, he rushes to marry her.

To find an audience, the novel requires revision, with an eye to imbuing the protagonist with some admirable qualities and following potential storylines to completion.