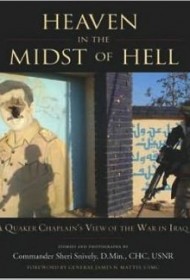 Commander Snively, a Quaker minister and U.S. Navy chaplain, served a year with Marines at a trauma hospital and morgue in the Al Anbar province of Iraq. This book–a well produced, if unevenly written coffee-table-style volume combining photos and text–offers reflections of her time there.

Snively’s strength is her heart. With great empathy, she shares stories of the men and women who ended up at the trauma center, many only blood and body parts at the time of their arrival. Others are physically intact but emotionally shredded (for example, David, a soldier who mistakenly killed an Iraqi boy and is so wracked with guilt, he has tried suicide). In between such stories, Snively writes of daily life in the center: military workers who throw the blood-stained clothes of incoming wounded into orange Home Depot buckets, bag the personal belongings of the dead, learn to appreciate the smallest of gifts in a barren land–romance novels in the ladies bathroom, a lone butterfly –and treasure each other’s support and shared experience.

Snively’s narrative is filled with lovely descriptive passages as well as interesting notes of irony (the sidebar comparing wrapping a Christmas package with wrapping a body to place in a casket is particularly striking). But her stories sometimes lack context and are occasionally told non-chronologically in a way that intends to be artful, but will end up only puzzling readers. Alas, a closer edit could have turned this heartfelt story into something stellar.