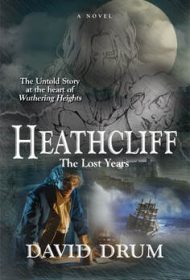 In Wuthering Heights, Emily Bronte chronicles the life-long relationship between Catherine Earnshaw and Heathcliff. She omits, however, any significant description of Heathcliff’s experiences during a three-year disappearance. In Heathcliff: The Lost Years, David Drum fills that gap.

Drum’s project is to explain Heathcliff’s evolution from “stable boy to gentleman,” which he calls “one of literature’s great unsolved mysteries.” Through a series of adventures, Drum explores Heathcliff’s social as well as psychological development, explaining why he eventually returns to Wuthering Heights with “iron in his heart.”

Drum devotes the majority of his book to Heathcliff’s adventures on a slave-trading ship. A final portion captures various intrigues that he experiences on returning to England as he continues to try to gather the fortune he needs to return to Wuthering Heights and claim Catherine.

Drum writes with engaging prose, and his plotting is precise. The vivid descriptions of Heathcliff’s time on the ship and his exposure to the atrocities of slavery will capture the reader’s imagination. They explain Heathcliff’s emotional evolution as well as more broadly revealing the intricacies of the slave trade.

Drum threads the narrative with a series of Heathcliff’s dreams that give the novel an intriguing, mystical component, consistently reminding readers of Heathcliff’s attachment to Catherine as well as the work’s larger indebtedness to Bronte’s masterpiece.

On the downside, the novel’s characterizations of Africa and Africans could be perceived as offensive. For instance, an African king reacts with childlike amazement when presented with a gun, and English sailors seduce seemingly gullible African women into sexual encounters by offering them glass necklaces. There are other similar examples of unfortunate stereotypes, which some readers might consider off-putting.

In general, though, Drum admirably succeeds at spinning an interesting tale, while also explaining Heathcliff’s unexplored transformation in Wuthering Heights. Fans of Bronte’s novel will enjoy considering these intriguing possibilities.