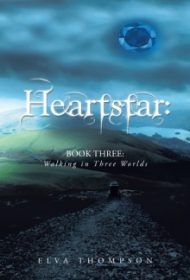 Rape, sodomy, torture, pedophilia, human sacrifice, and murder abound in this third book in the HeartStar series, a dark urban fantasy that pits a vicious cult of devil worshippers against a magical fairy and her friends.

To provide readers with background, the book begins with a brief synopsis of “The Story in the Mortal World So Far” and “The Story So Far in the Fourth Dimension of Faerie.” Throughout the story, chapters switch occasionally from one dimension to the other, although they mainly focus on the mortal world where Giles Kingsbury, a satanic pedophile, conducts monstrous sexual rituals inside his mansion, aided by his cult of devil worshippers. The local police, paid off by Kingsbury and fearing his supernatural powers, ignore what occurs at his mansion.

Fighting against the devil worshippers is Emma, a fairy whose late father was in the satanic cult and conducted sexual rituals on her as a child. She is joined by five friends: a fairy, animal activist, West Indian mystic, headstrong cop, and lustful alcoholic. The group is greatly outnumbered, and each encounter with Kingsbury and his cult results in the rape, torture, or murder of Emma’s small band of heroes.

The story is action-packed, but can be repetitious (Omar, the mystic, describes Kingsbury and his followers as “Dem wicked sons of Babylon” and “Dem sons of wickedness” or something similar in each of his many references to them). Plotting garners more attention than character development.

Satanism and pedophilia will likely turn off many readers, but those who like their fantasies dark may appreciate this offering. The story ends abruptly without resolution, leaving the possibility of a sequel.