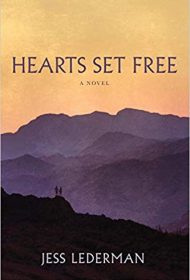 Jess Lederman’s historical Christian novel, Hearts Set Free, delivers a riveting ride, beginning in the Alaskan territory in 1925 and ending up in modern-day Babylon, otherwise known as Las Vegas. Lederman captivates readers as he weaves in historical figures and events centering on the building of Hoover Dam, but also including WWI.

The novel revolves around Luke Noongwook, an Alaskan native whose father abandoned him and his mother for a sophisticated New York reporter. As Luke and his mother leave Alaska to search for his father, eventually settling in Nevada, their stories intermingle with that of David Gold, a veteran-turned-prize-fighter-turned-preacher. Both Luke and his mother discover God and wind up helping David with his Las Vegas church. But Luke also discovers more about science, as well as romance, and the story grows complicated.

The tale shifts between past and the present, young Luke and old Luke. In later time-frames, Luke is a 99-year-old retired astrophysicist. Here, the story introduces the science TV news team of Joan and Tim, who venture to Las Vegas to interview Luke about the work of George LeMaitre, a priest and physicist who served in WWI alongside David. The TV team hopes to uncover an important document from Luke that has lasting implications on LeMaitre’s work.

Lederman tells the story from multiple points of view, and it’s slowly revealed how all the characters are interconnected. Although designated as historical and Christian fiction, the saga – which could easily span several books – embraces aspects of multiple genres, including action/adventure, supernatural, mystery, and romance. Christian fiction fans will enjoy this book, as will anyone who appreciates fine writing and expert plot development. Although the narrative takes an evangelical perspective, it doesn’t disparage other Christian faiths.

Ultimately, the author creates such a believable world that by the end of this wild ride, readers might wonder if this had, indeed, actually happened.