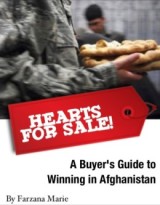 This book’s title is also the author’s thesis. Farzana Marie argues that winning the war in Afghanistan is both “vital” and “possible,” but only if the United States makes a concerted effort to win over the Afghan people — what she terms “the long game” — as opposed to a military strategy of attrition.

Such a thesis runs counter to the common argument that the war in Afghanistan is a lost cause, one from which the U.S. should immediately withdraw. Marie — who had been a teacher in Afghanistan and was then deployed there for two years as an Air Force operations officer — contends that the desire to withdraw American forces is the result of the “disintegration of the [American] national will,” arguing that the U.S. has “a moral responsibility to follow through on promises made.”

Marie maintains that everything America needs for victory is already present. She describes a program called “Afghan Hands,” involving a team of civilian and military personnel that understands Afghan culture, speaks Dari, the language of the Afghan people, and can work with Afghan citizens, winning them over from the propaganda of the Pakistani Inter-Services Intelligence. To date, the program has been limited to contact with Afghan government personnel.

The balance of Marie’s book is a fascinating primer on how to achieve the desired goals. She concentrates on the need for the military to learn Dari and improve its knowledge of Afghan culture. She includes a large section on useful Dari phrases and offers anecdotes of her time in the field to illustrate the unique nature of Afghan culture and the military usefulness of such cross-cultural education.

Marie’s thesis will remind historians of the belief during the Vietnam War that if America won the “hearts and minds” of the Vietnamese, they would flock to the American banner, thus shortening the war. That this strategy did not work in Vietnam doesn’t mean it should be ignored in Afghanistan. Indeed, as a readable, thoughtful presentation of that argument, Marie’s book deserves a wide readership.