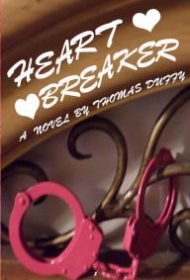 Amber fled a catastrophic Maryland childhood, landing in the Big Apple’s Brooklyn Heights neighborhood. Soon facing a financial crisis, she decides the best method of making ends meet is by selling herself for sex. Eventually, an online advertisement brings the wrong client, and Amber is kidnapped. She first pleads for release, but the two begin to interact and shortly, the kidnapper, reflecting on his own life and the women in it, suffers qualms and releases her. Returning to the city, Amber immediately encounters a young movie theater manager named Jeffrey. She moves in with him, allows him to support her, and in some ways continues the passivity of a kidnap victim.

While his plot is plausible, Duffy finds no heroes in his characters. Amber is a flawed protagonist. Her decision to sell her body comes too easily, made without introspection or regard to consequences. Her kidnapper, Miguel, is in pitiable emotional condition, but his sketchy backstory doesn’t inspire empathy. (The interaction between the two seems mild for such an ugly situation, but perhaps this just signifies Stockholm syndrome.) The other main character, Jeffrey, seems colorless, unambitious, and unsophisticated.

Duffy writes in short, declarative, and sometimes passive sentences. This flat recitation reflects the relatively dispirited narrative tone, which may be a deliberate choice by the author; unfortunately, it makes for uninspired reading. Dialogue is occasionally stilted (“You can see any movie at the theater I work which is about two blocks from here”). And although the author is a resident of New York City, his basic descriptions of Brooklyn Heights don’t deepen the novel; it’s as if he intends readers to already have familiarity with America’s cultural and economic capital.

Despite such stylistic flaws and primary characters who inspire little empathy, Duffy’s literary dissection of youthful angst is interesting, and Heartbreaker could appeal to those who enjoy existentialist fiction.